As pictures of the construction progress come out I thought it would be interesting to review the progress and see exactly how big the project will be compared to the original plans. First off here is an aerial photo from the end of September 2005. 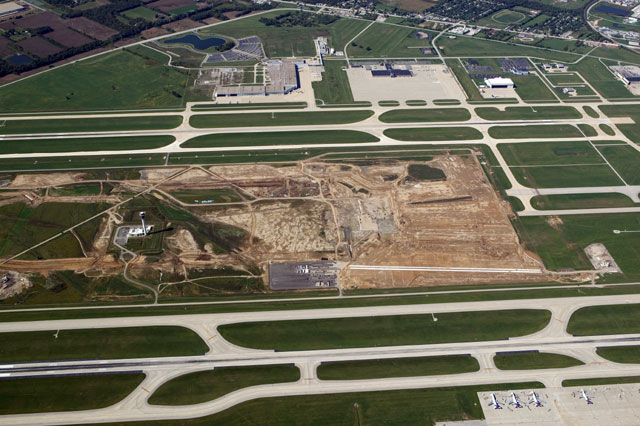 Here is the image of what the completed project should look like. This is an aerial rendering. 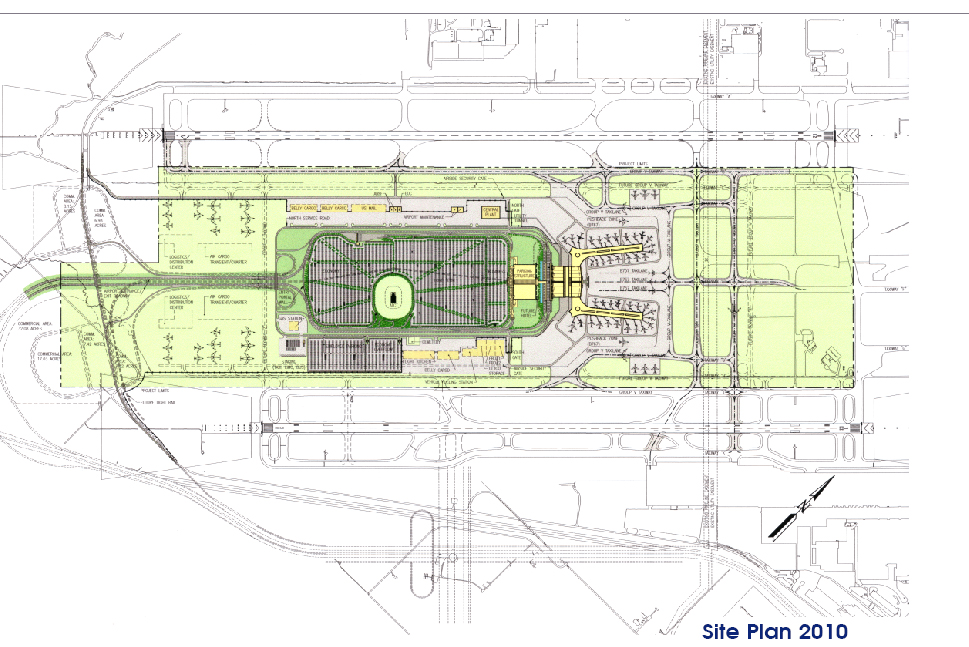 Now look at this image. I have taken the aerial photo and drawn a blue line along some kind of line left in the construction project. What does that line represent? Are they cutting out the concrete to make a newer & better taxiway between the parallel runways? Or is the area between the grading and that line going to be dug out to allow for the tarmac to be built out to that line? There must be some significance to that line considering the concrete services has been set up on the other side of that line. You obviously don't want the plant to be set up in the middle of your grading project but why set it out that far unless you are going to be working up to that line. It could be for a taxiway but it seems unlikely that you'd be working on that right now right in the middle of the construction project. I'd think the taxiway would be the last thing to be built. 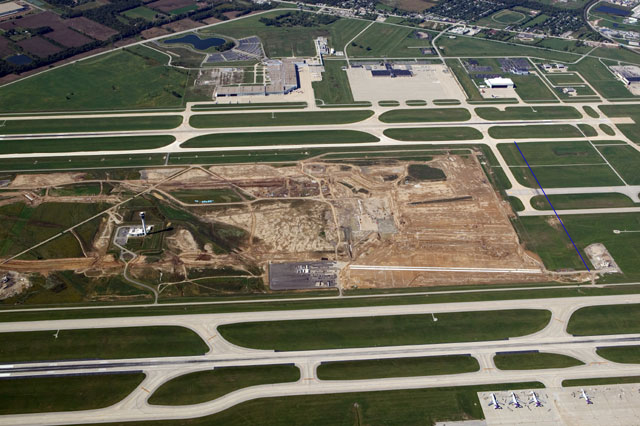 This image shows it a little better. At a glance it looks as if the concrete has been cut. The area is right above my blue line on the bottom of the picture. 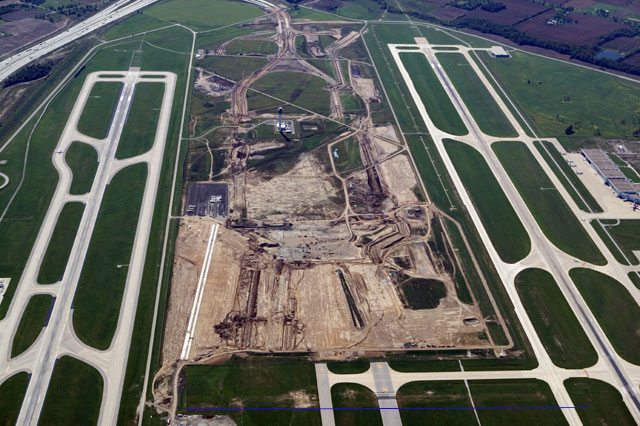 Here is the phase 2 image with the blue line in place approximately where the line seems to have been cut in the current phase of the construction. Is there any significance to this? Does this perhaps tie in to the greatly increased number of parking spaces in the project? 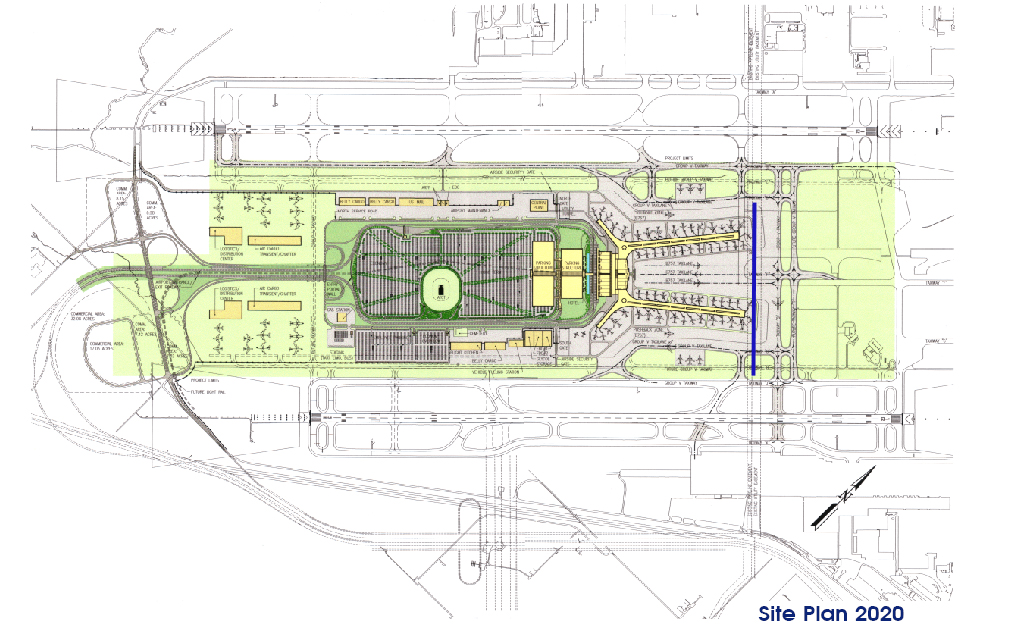 And in this final image I show you the aerial photo from above but I've added a 2nd line in. This shows the approximate edge of where the tarmac would be. The location of the concrete plant and the path to the project stays clear of this area. Is this a coincidence or is this being done because the tarmac will be built out to that area? I mean if the taxiway was going to be built at this point between the runways it really wouldn't matter where the path went because it would have to be removed eventually anyway to build the taxiway.

Don't get me wrong. Its fine either way. This is more of a discovery topic than anything for me. Personally I think the terminal should be built with more than 40 gates. This will give the opportunity for more airlines to move in or for existing ones to expand their routes. Giving 6 additional gates from 2005 to 2020 doesn't give much room for growth. It would certainly help fill up the parking spaces planned for the project. Whether the terminal has 40, 60 or something in between remains to be seen. Just makes for interesting guessing until then. 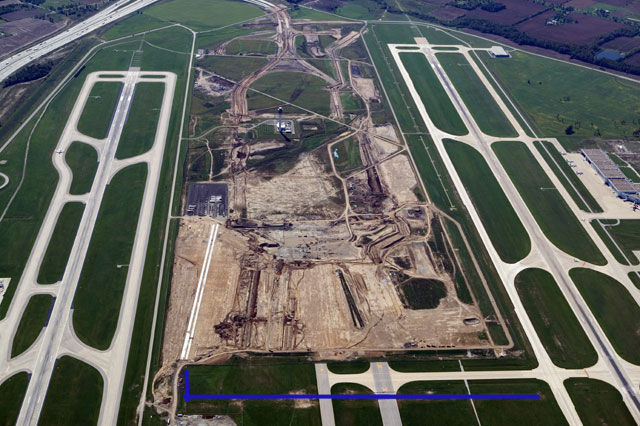 Here is part of what I'm talking about with the parking increase....

"including a 5,900-vehicle parking garage"
http://midwest.construction.com/news/building/default.asp

Thats based on the old number. According to the new airport website the number will be 7,000 garage parking spaces.
http://www.newindairport.com/stats.shtm

Also the terminal will open with as many as 150 ticket kiosks which is a significant number.

The other area will just need to be tarmac so it can be built later, after all of the building is done.

That is just my interpretation on that one. Nice pictures btw.

Why yes, I am a rocket scientist, thank you very much.

So are you thinking like me then that this is going to build out to phase 2? Phase 2 is the 2020 plan.

BTW the aerial photos are from newindairport.com . The computer images are from the midfield terminal executive summary. The brilliant computer graphics work (the blue lines) is my doing

I think that in this case, a decision whether it will go to phase two or not is not supported by evidence on hand. I would say that from your pictures, the pahse one construction requires a gradation for the foundation out at least that far. If phase two does go into effect, we will see it later, with a further expansion of the imfamous blue line area.

Why yes, I am a rocket scientist, thank you very much.

So do you think differently now that you know that those are two different models? One of 2010 and 2020?

You'll see what looks like a line in the old runway. That was the cutoff line where the old concrete was removed. In the aerial photos now you see the same kind of line but on the other side of the taxiway. I suspect this will be the dig point as well. All the concrete below that line will be removed. Just a guess. We should know more in the coming months.

According to a recent Star News report the terminal will be 40 gates. The parking of 7000 spaces will be 5900 general parking spaces and 1100 for rental cars. The old terminal has parking for 1800 cars in the garage. This is still a significant increase in parking spaces. Total parking is 17,000 spaces while the old facility has 11,000.

If the need comes up the additional gates can still be added with ease.

Here is a webcam image from the construction site. Doesn't really seem to fit the 2010 or 2020 plan right now. I wonder how much the plan has changed from the original design. 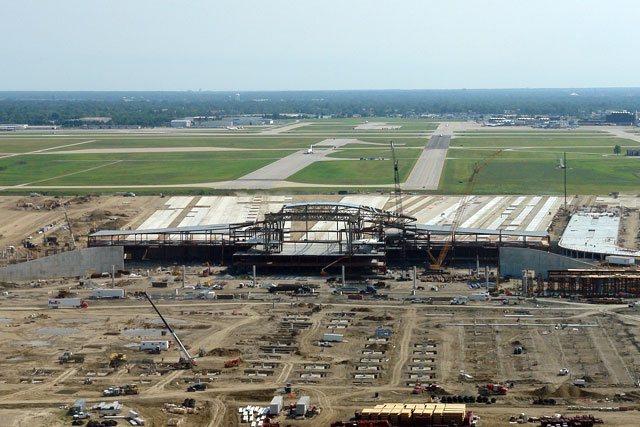 I find it interesting that you can view details on current bids and pending bids with the exception of the bid package related to jet bridges. I wonder why that is not available.

The current tarmac work does NOT match the layout in the detailed site plan.

Here is the latest cam pic...

The tarmac goes right up to that taxiway. That is much closer than in the plan. Go to Google maps and count up all those fuel hydrants on the one part where you can see them. There are quite a few of them. Looks like they are trending much higher than what you'd expect for a 40 gate terminal.

So you're thinking that the airport board is already moving to build more than the 40 gates announced? I would think that has to be made public, unless it's being funded directly by a private group - like an airline that wants some additional gates to establish a hub here. Then again, maybe the board have just decided to go ahead with some additional infrastructure now while it's easier to build it in, in anticipation of needing expansion sooner than originally projected.

Can I get a peanut crumb with that thimble of Coke?

Its hard to say for sure. Then again it could be the different angles the images are taken from that make it look larger than it really is. I would think it would be in their best interest to get the infrastruction put in place now. Should be cheaper to do it now instead of working around jets later.

I would not be surprised to see them build the concourses a little longer than planned and just keep the "ends" empty until the need arises for the extra space. From the video i captured after landing last week from IAD, the right concourse (closest to the fed ex facilities) seems to be longer than what i had thought. I have the video and i have to get to a hotspot to post it...and i still have to send it to Indy..if i can get off my lazy a$$.